Gebrüder Armbruster, jeweller and goldsmith at the Tiroler Schmuckkastl in Seefeld, Tyrol, since 1937. 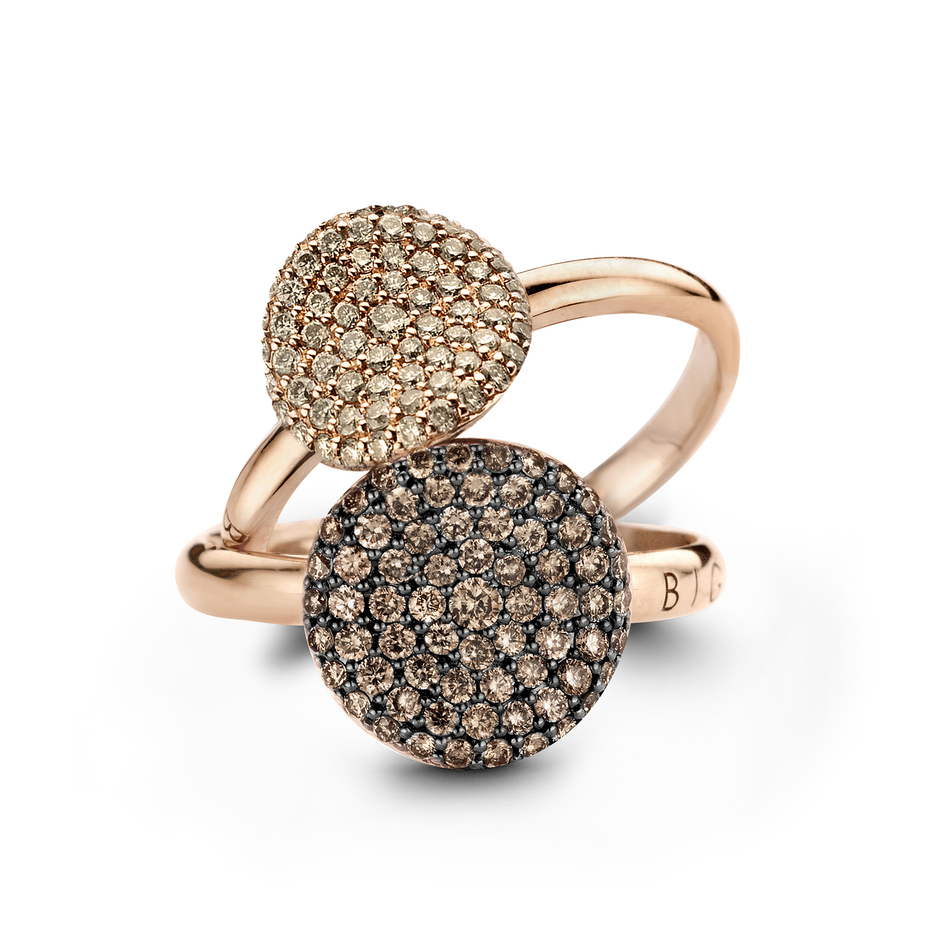 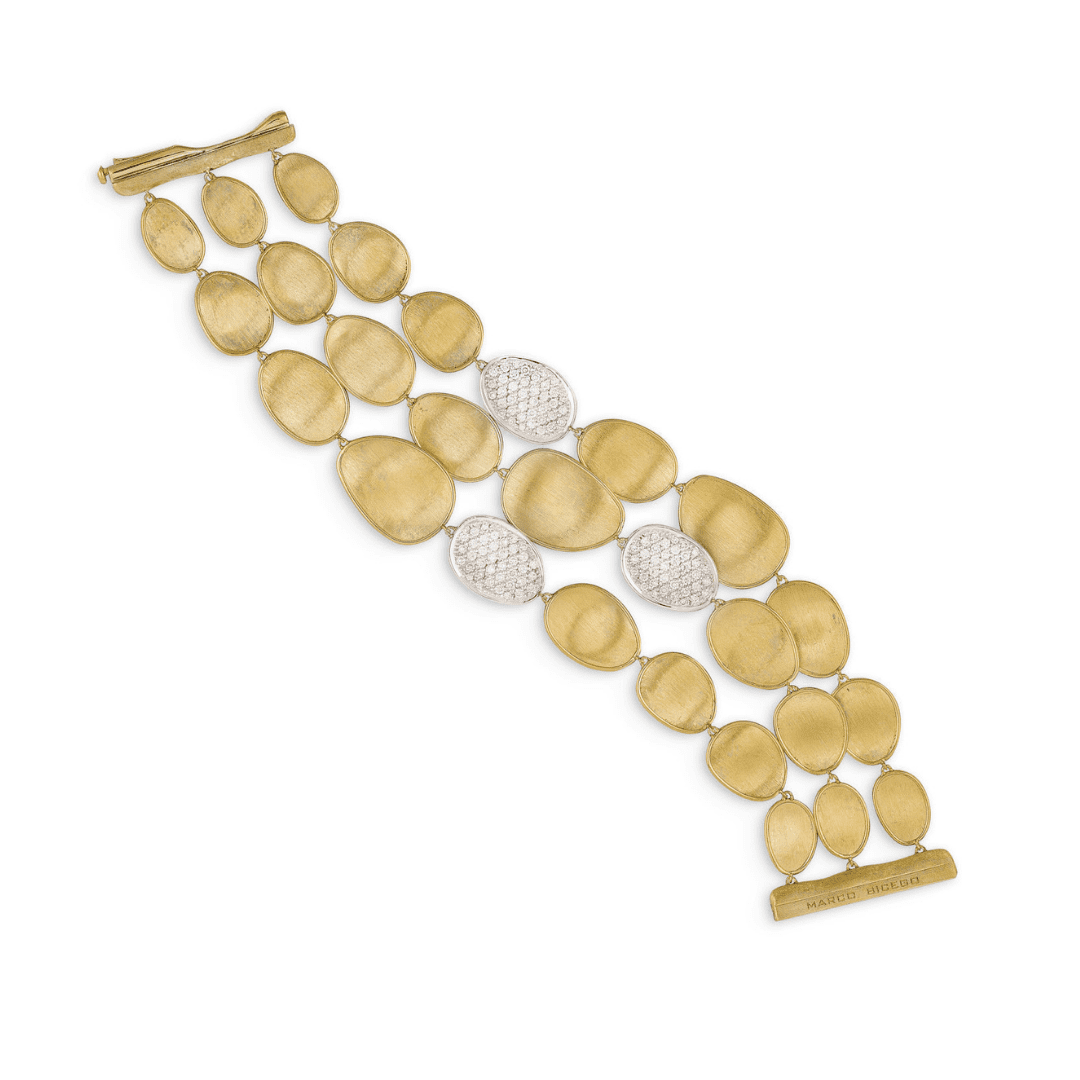 The Tiroler Schmuckkastl – a landmark of Seefeld

D
Decorated with flowers in the summer and covered in snow in winter, the Tiroler Schmuckkastl has become a landmark of the internationally renowned tourist resort of Seefeld in Tyrol.

The distinctive façade with its Lüftlmalerei fresco gives the building a romantic character, which also continues inside the Tiroler Schmuckkastl with soft colours, delicate murals and elegant furniture, including some original pieces dating back to the 1930s.

A jewellers with history.

A unique place to purchase a special piece of jewellery. 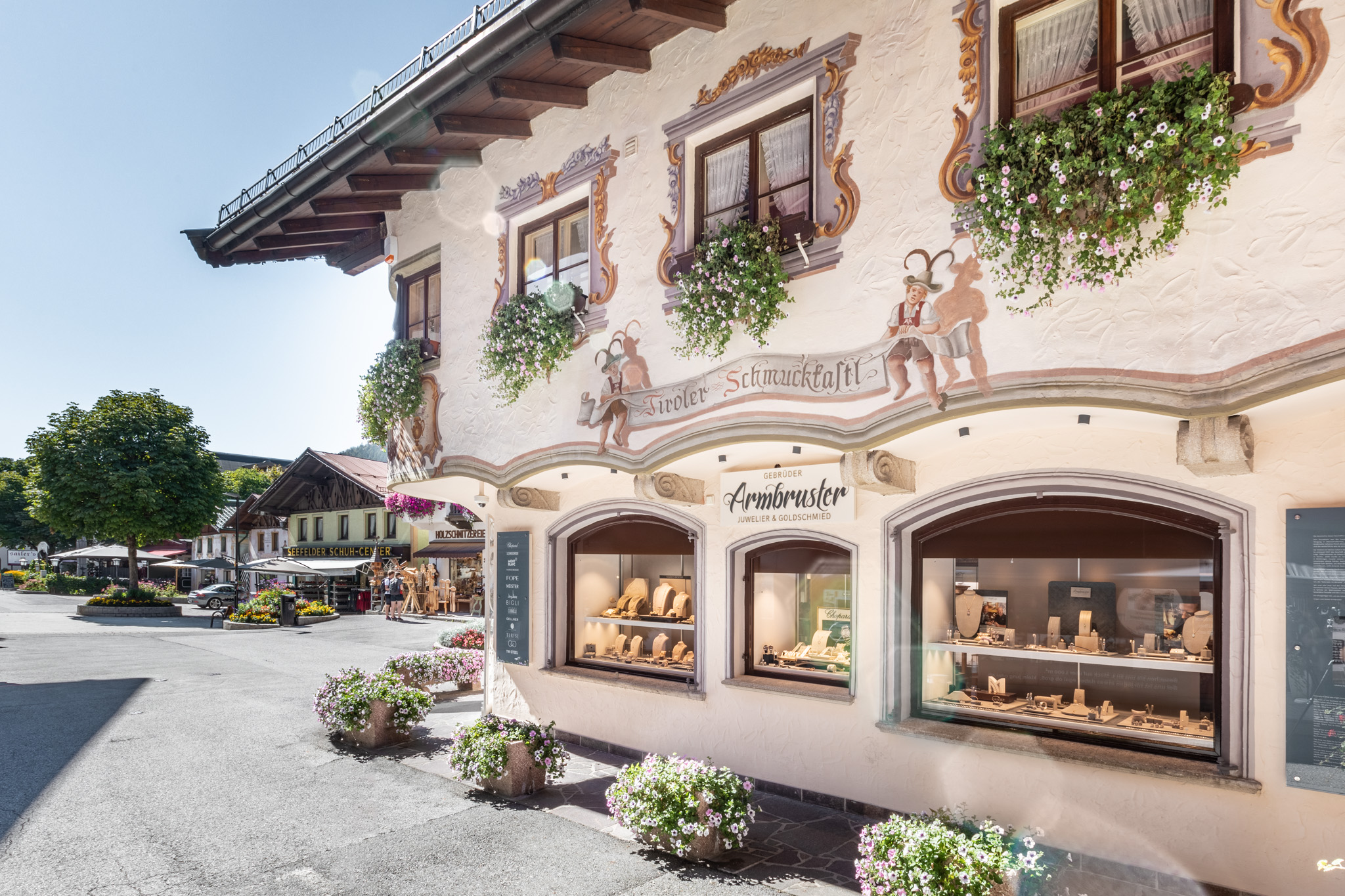 T
he Tiroler Schmuckkastl jewellers has a romantic setting in the heart of the Seefeld pedestrian zone in Tyrol, only 20 minutes from Innsbruck and 30 minutes from Garmisch-Partenkirchen. Not only does it stock select, internationally renowned jewellery and watch brands, the shop also has a goldsmith’s workshop on site. A rare combination, which complements the jewellery range with bespoke pieces and repairs of all kinds.
‍
Renowned jewellery and watch brands, an inhouse goldsmith’s workshop and the romantic setting of the Tiroler Schmuckkastl. 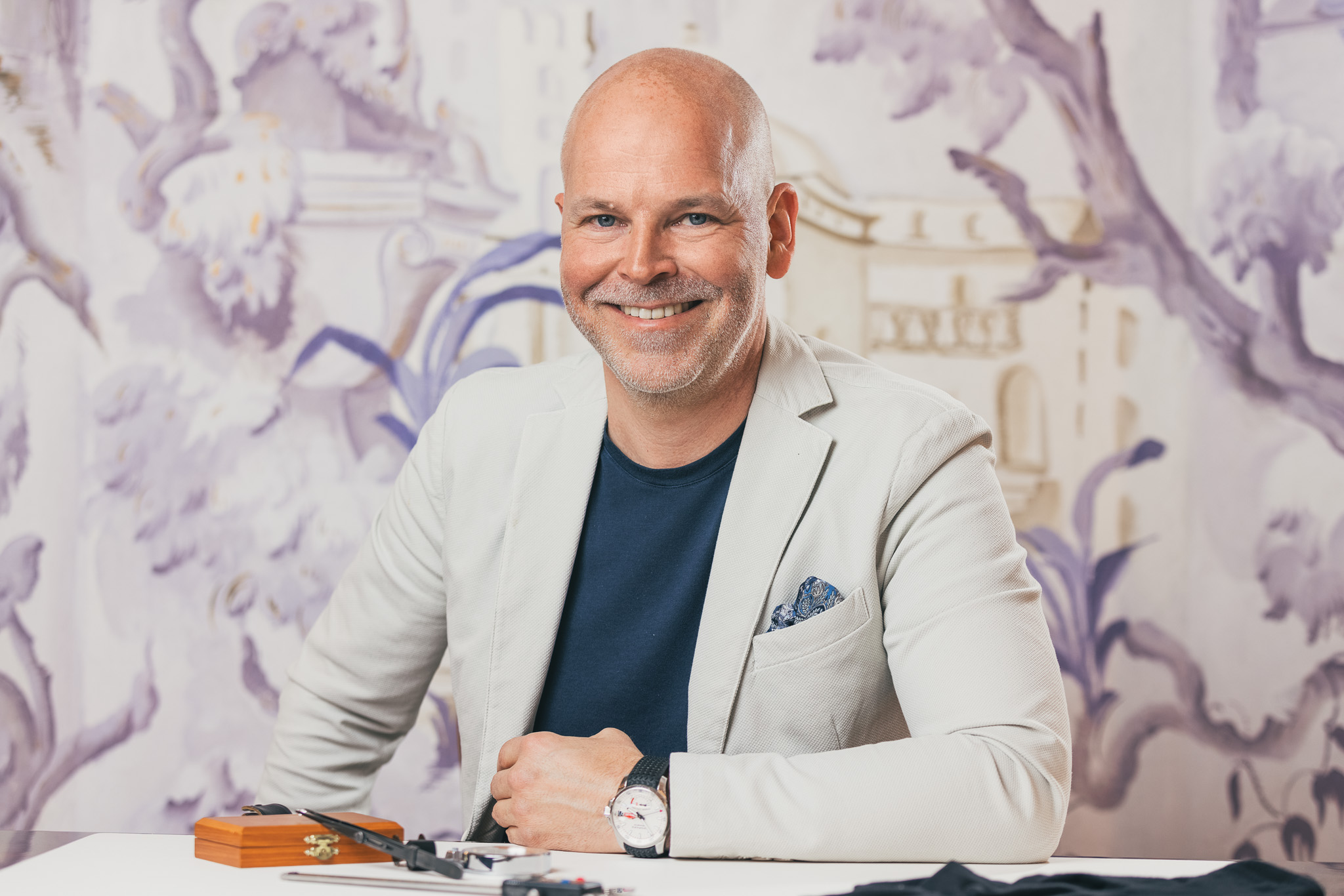 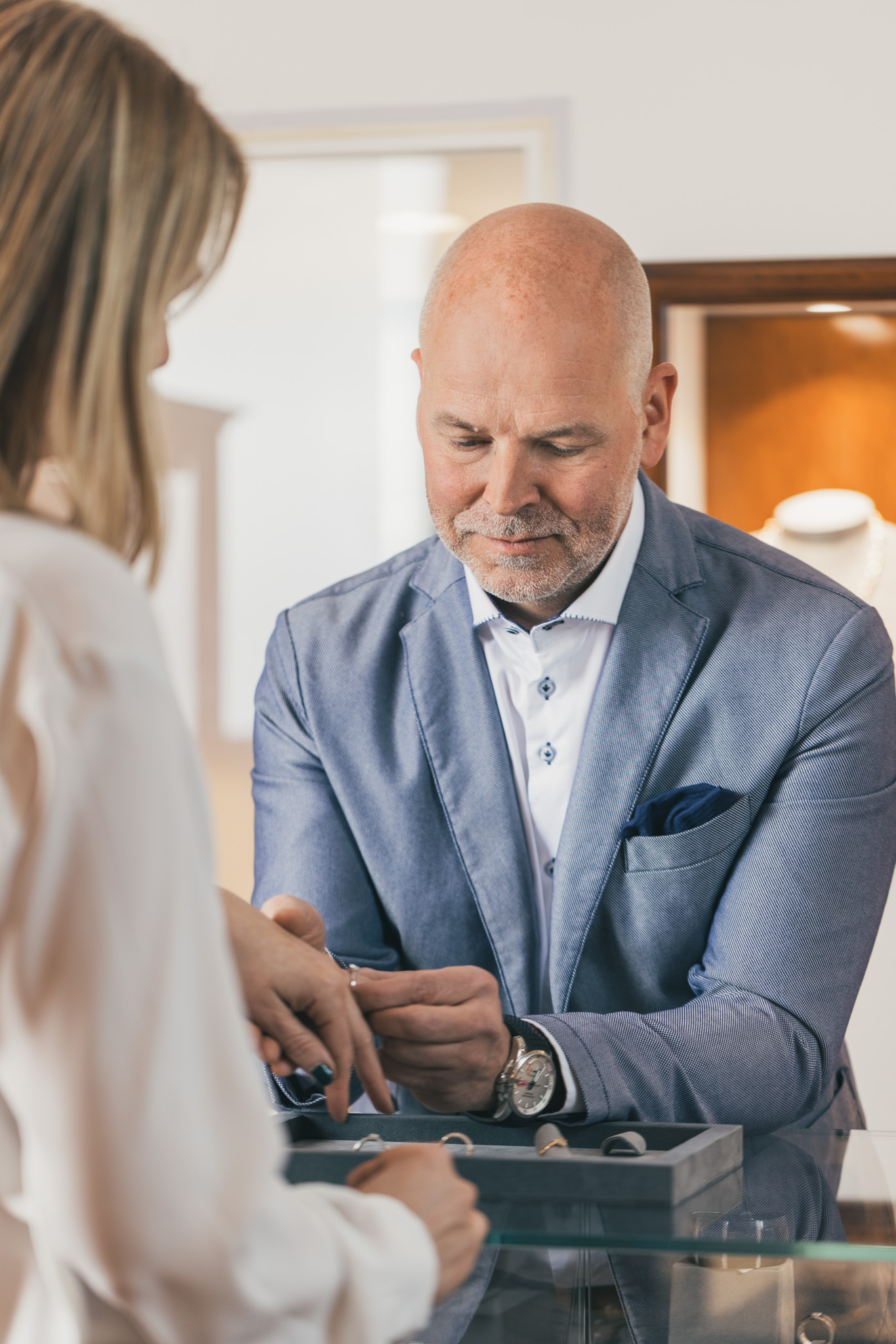 J
ürgen works front of house at the Tiroler Schmuckkastl. He loves advising the customers, sharing his expertise and passion for the business with a calm, friendly air. No detail is too small: the prong setting of a diamond ring, for example, the tiny cogs in a clock mechanism, the smile of a satisfied customer. Colours are referred to using shades and metaphors, as they appear to the trained eye of the gemologist.

He is more of a listener than a speaker and likes to get things done rather than sit on his laurels. In the grand world of jewellery and watches, his focus is on quality, value and consistency because appearance and luxury are not the only things that are important to him. He gives his full attention to all customers, without prejudice, and has a special ability to make everyone feel at home. A legacy perhaps from advising customers from the world over for the past 30 years. 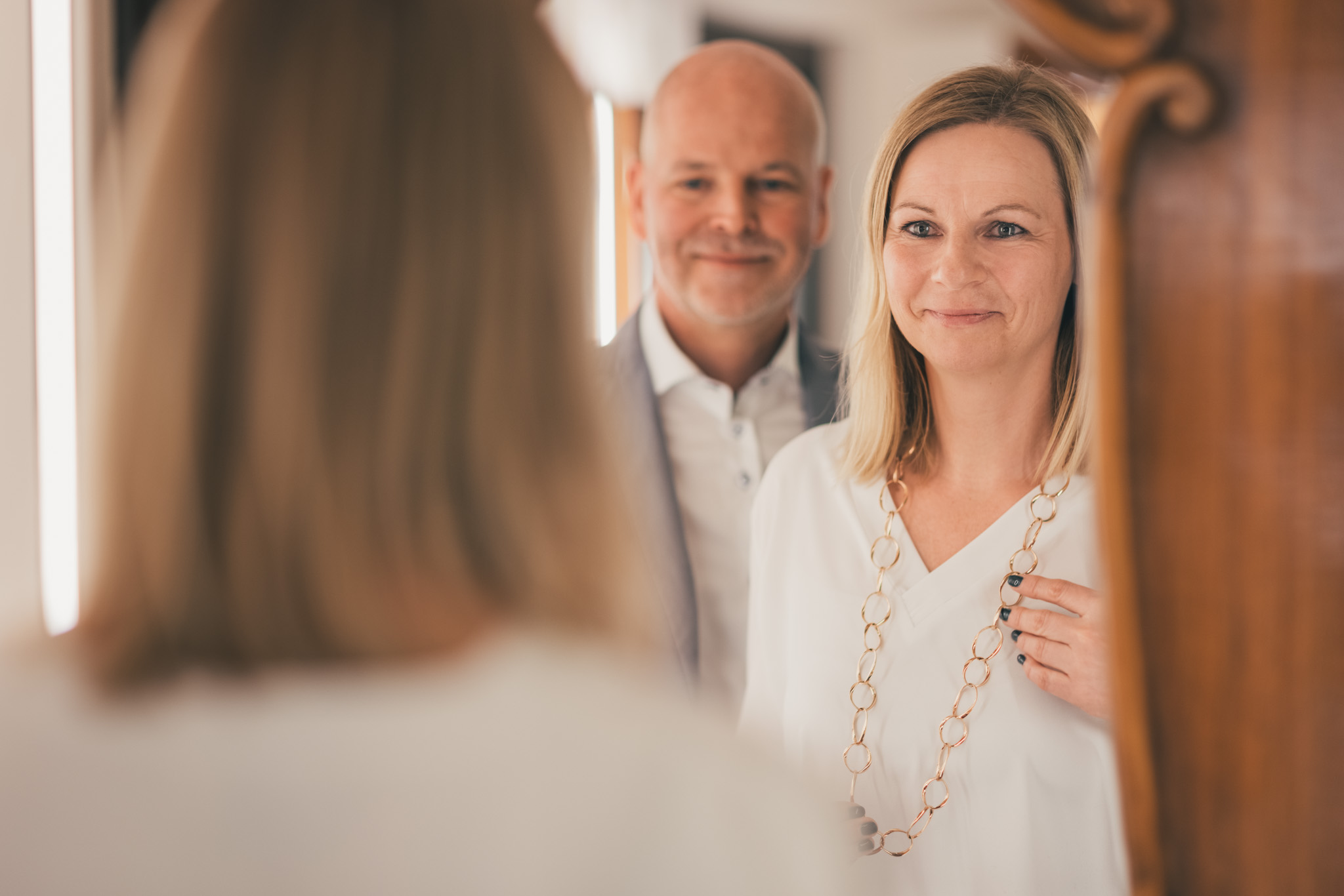 B
eing made to feel welcome and at home. Listening, recommending, explaining. Understanding when time is of the essence or when it would be better to take a little longer. Noticing when some discretion is required. An extensive knowledge of the materials and properties of jewellery and watches.

Kindness, patience, empathy and honesty. Expertise with colours and proportions, respecting taste and requirements. If asked what we are particularly proud of, we would have no hesitation in replying: expertly advising all of our customers.

Simply because we love our job! 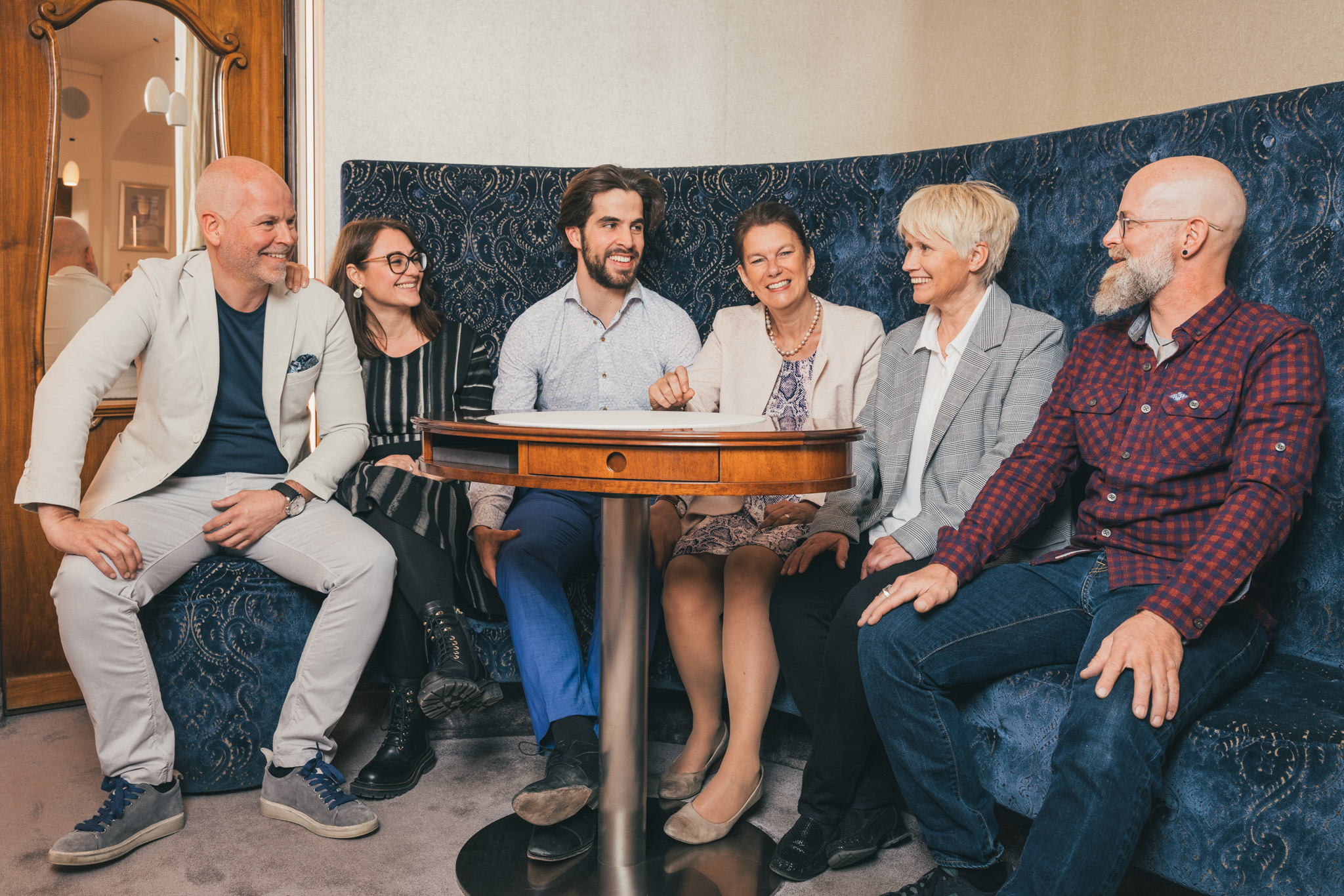 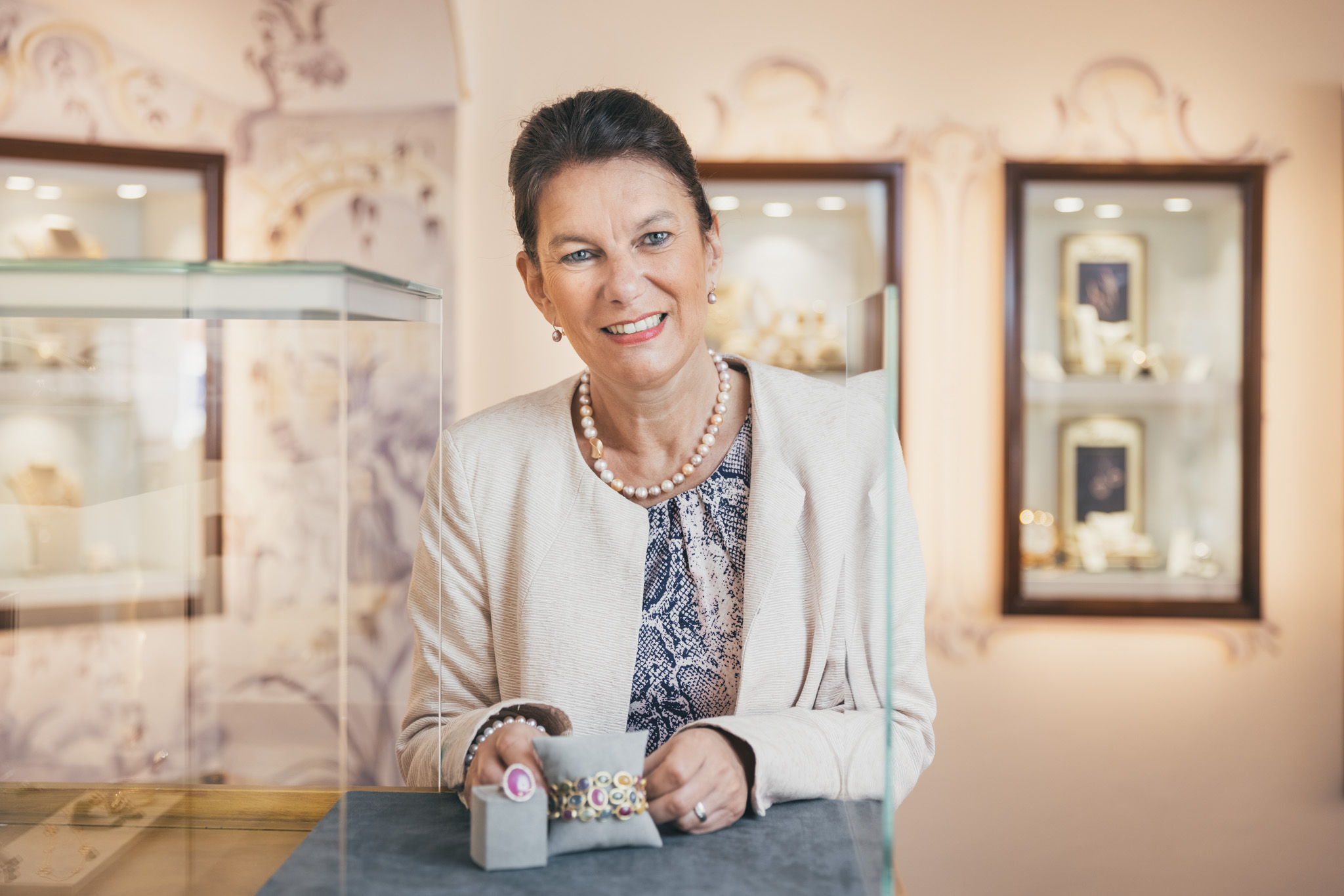 H
edwig has been a valued member of the Tiroler Schmuckkastl sales team for many years. Friendly, reliable and always with a little joke at the ready, she knows how to advise customers with charm and sensitivity. Originally from the Netherlands, she brings an international flair to the team and has the same down-to-earth nature whether serving customers from around the world or locals. 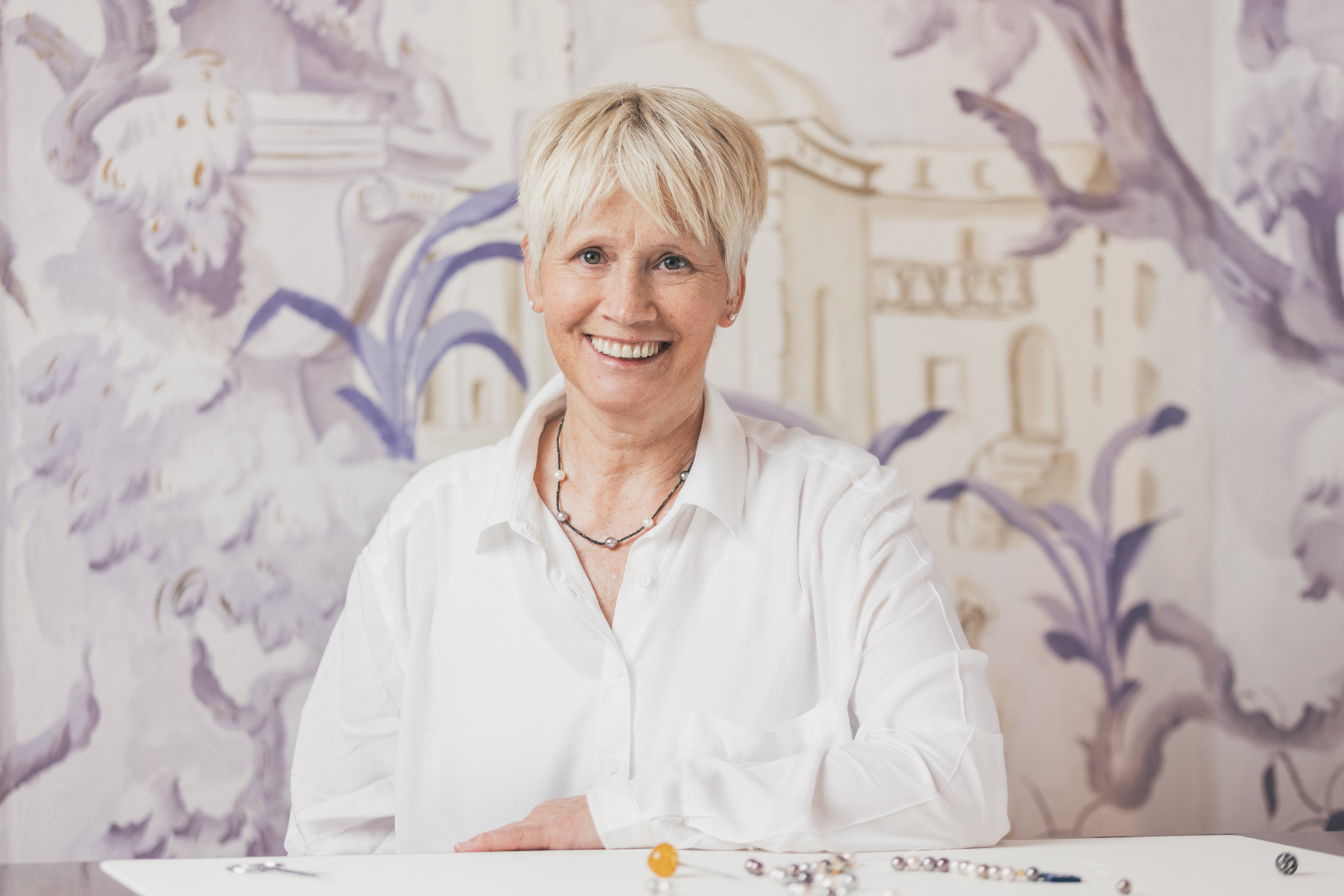 I
f you have ever photographed the Tiroler Schmuckkastl in full bloom in summer, then you have already unknowingly admired the fruits of Gaby’s labour. If a job requires patience, dexterity and creative skill, she’s the one we turn to: stringing pearl necklaces, braiding macramé bracelets, mounting elastic stone bracelets.

Having worked with us for 20 years, she knows every corner of the building and keeps it looking beautiful. Time and again, we ask ourselves: what would we do without Gaby! 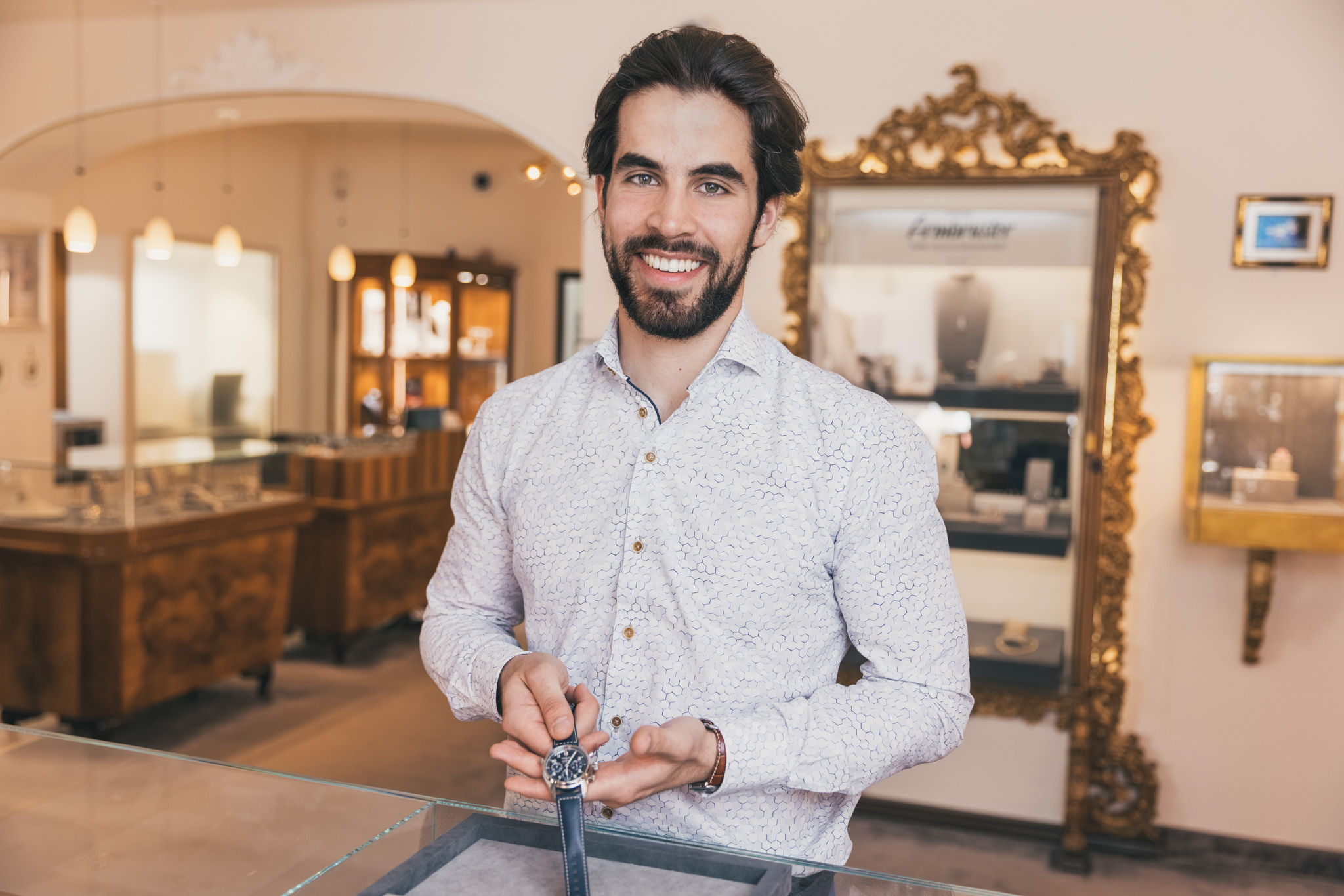 C
arlos is the youngest member of the team and Jürgen’s son and has been something of a breath of fresh air for the business. Eager to learn and respectful, his polite, yet self-assured air and youthful enthusiasm have captured the hearts of our customers.

He has also inherited his father’s calmness and passion for watches. For Carlos, not only is the Tiroler Schmuckkastl a place of work, it is also somewhere to call home as his life, between work, studies, sports and many experiences, continues on its journey.

C
ontrary to what you might expect, our jewellery story did not in fact begin in Seefeld.

The roots of our business can be traced back to the Schmuckkästchen jewellery shop our great-grandmother once owned in Oberschreiberhau, a town in what was then German Silesia. This was also where our grandmother, Johanna, learned the trade before her marriage. Her husband was also a jeweller from Bavaria and together they took over management of the Alpen – Schmuck –Kästl in Garmisch. However, the marriage was not a happy one. Newly divorced and with an iron will, she came to Seefeld alone in the 1930s to continue her profession.

She rented a small shop on a farm belonging to the Kuen family, which is where we are still based today. Thus, the Tiroler Schmuckkastl was founded in 1937.
In 1938, she married Johann Schiestl, eight years her junior, whom she had already met in Garmisch when he worked as a bellboy in the hotel Garmischer Hof. In 1939, he was called up for military service, leaving our grandmother to manage the store alone under the most difficult economic conditions throughout the Second World War. Both brothers of our grandfather, Johann, died in the war, soit was he who inherited the family hotel Gasthof Oberwirt in Gerlos. He soon sold it and, with the profits, the couple purchased the building from the Kuen family in the 1950s and rebuilt the Tiroler Schmuckkastl as it still stands today.

The shop has been in our family ever since, and is now on its 3rd generation of owners. In 1978, Johanna and Johann’s daughter Rosmarie took over the business with her husband Günther Armbruster. We, Gebrüder Armbruster (the Armbruster brothers), have been in charge of the company and its in-house goldsmith’s workshop since 2011.

And the story continues. 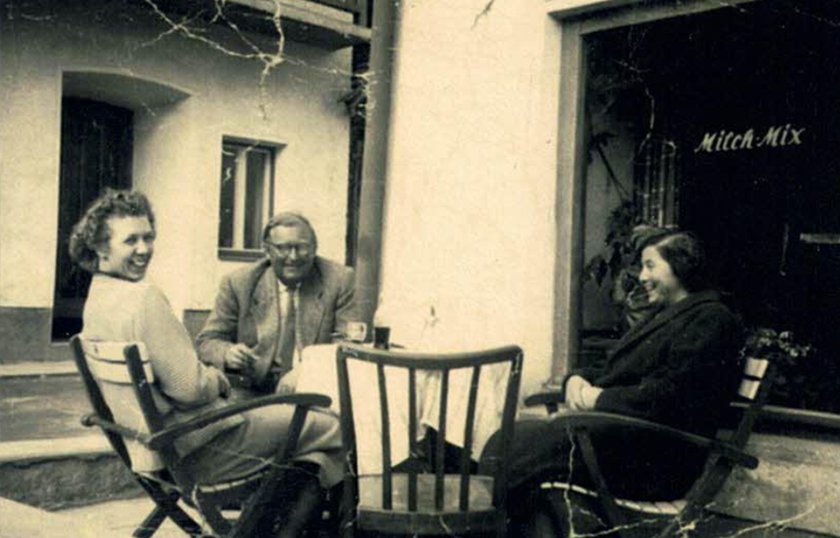 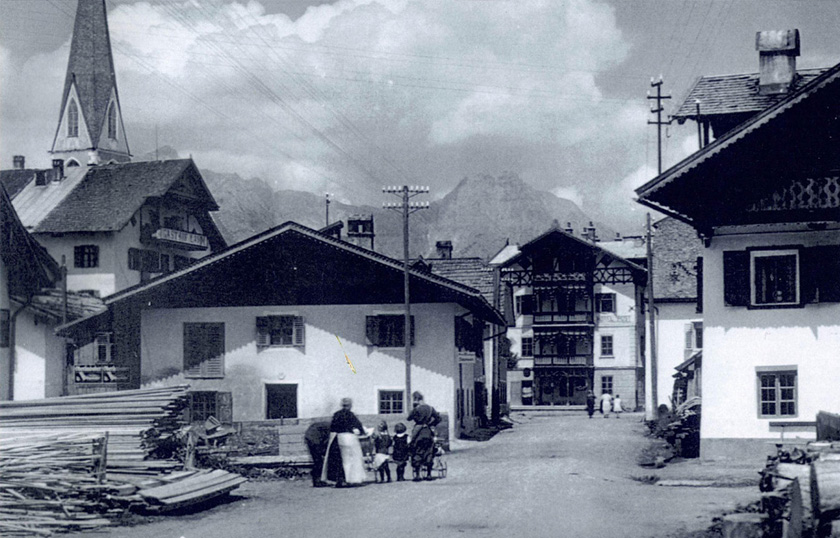 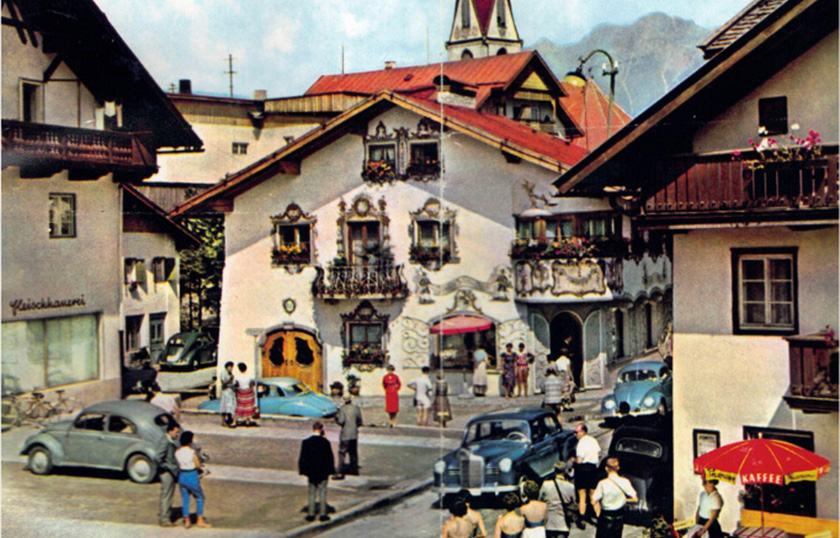 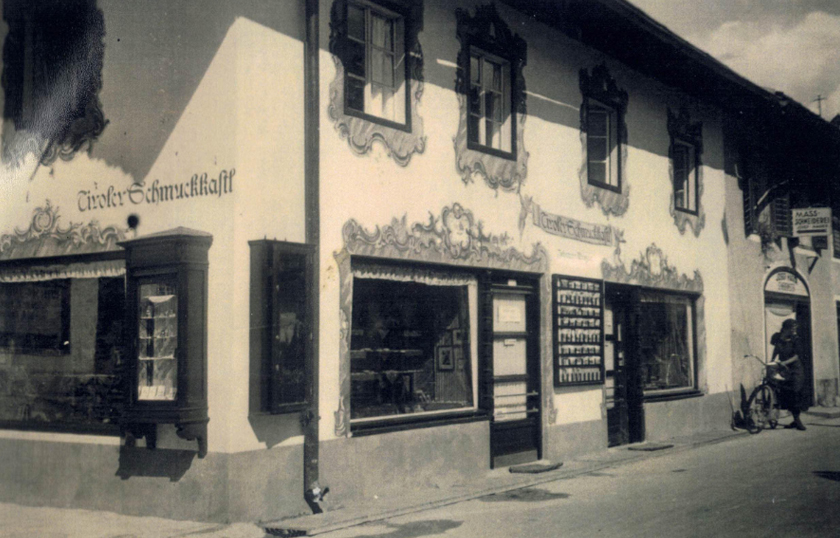 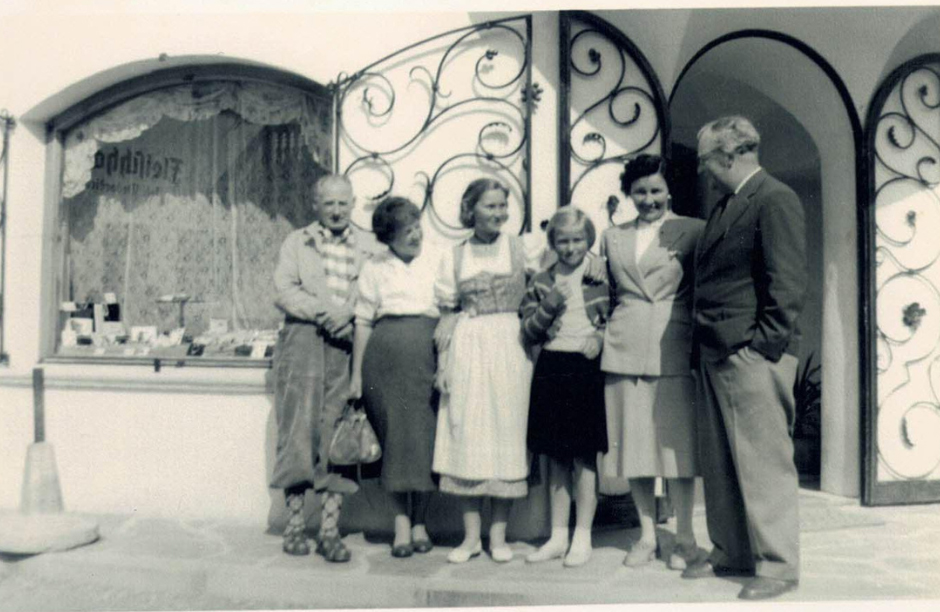 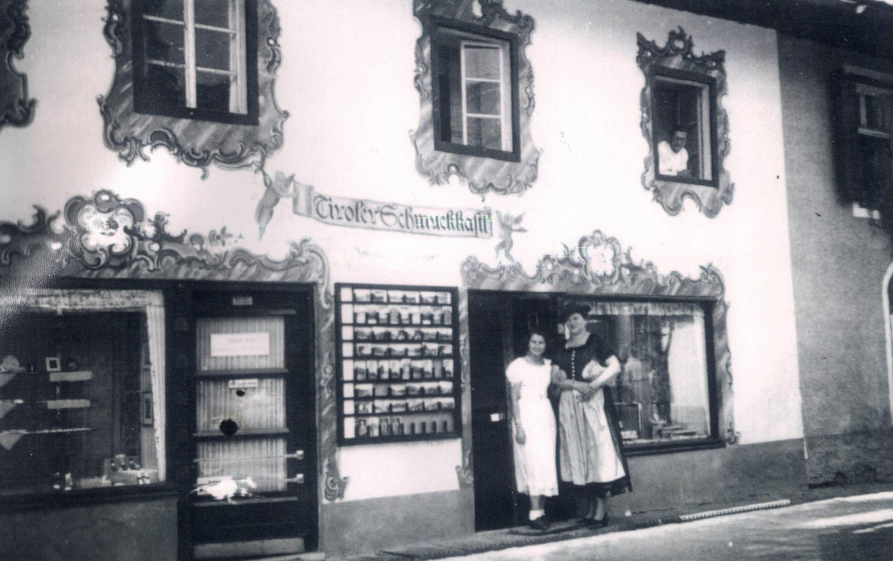 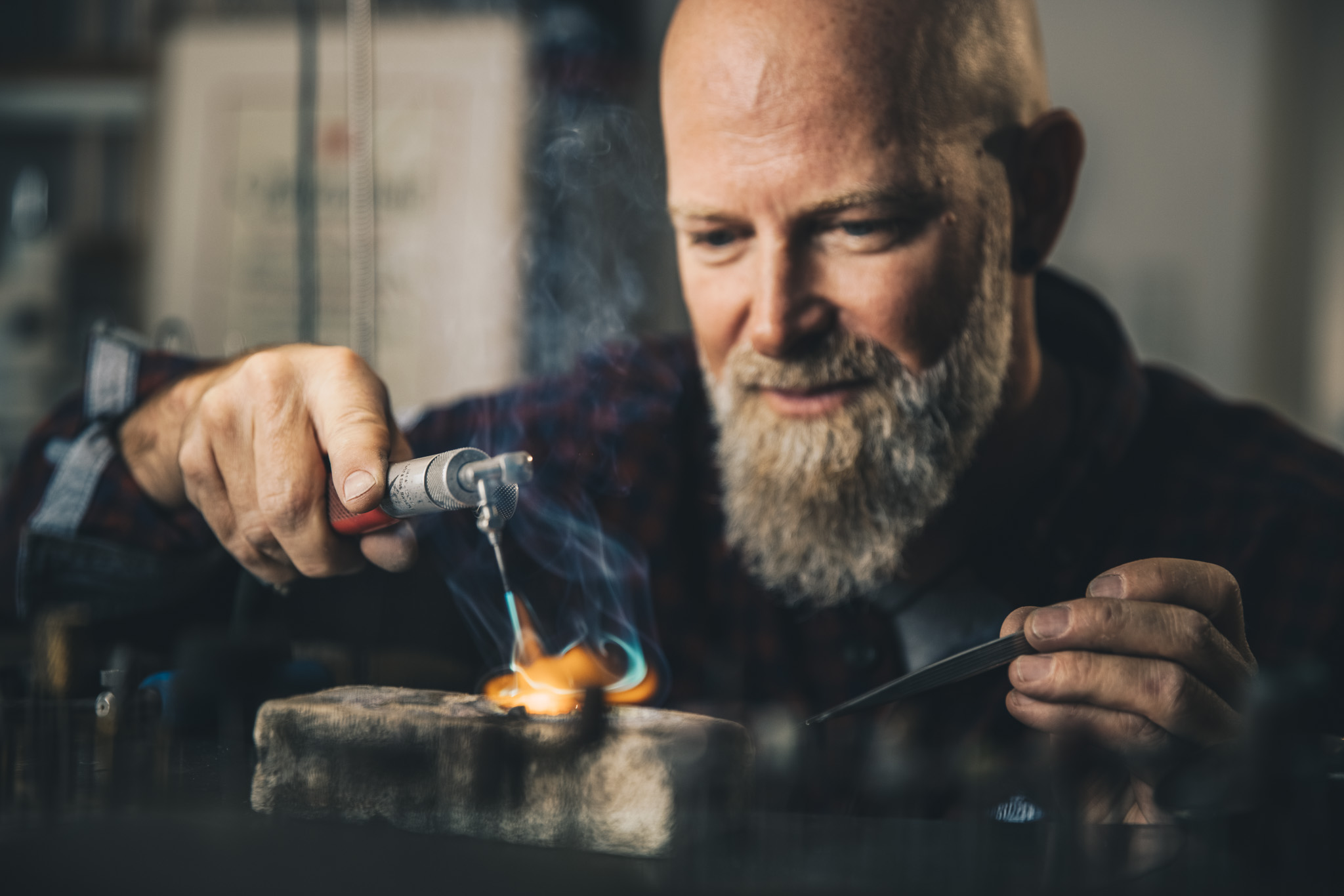